Note: An abridged version of the ESOMAR study “Leveraging and Empowering Cambodia’s Other Half” is available here

When initially conceptualizing our study, Leveraging and Empowering Cambodia’s Other Half, the need for the research was clear. What we didn’t realize at the time, however, that our selection of the research methods would be the most critical piece regarding the study’s actionability. I’d like to walk you through my experience, which demonstrates how the inclusion of a compelling narrative aided the study’s resonance among both NGOs and the research community.

Let’s start at the beginning.

Need for the research

Gender inequality is a pervasive issue in Cambodia, manifesting itself in daily life in the form of domestic violence, a culture of male impunity, higher suicide rates among women, limited involvement in politics and public leadership among women, and lastly, the education of Chbab Srey (“code of moral conduct for women”) in the public school system.

Chbab Srey is a traditional poem written prior to the 1860s in Cambodia’s pre-colonial era. Certain lines in Chbab Srey (translated) include:

“You must serve and trust your husband, don’t make him feel unsatisfied.”

Additionally, there is an insufficient amount of publically accessible data on Khmer gender issues, and none specifically exploring gender across generations.

Further, from a global perspective, studying gender is relevant as women comprise half the population and even the most developed markets still have work to do (e.g., pay equity issues in the U.S., U.S. Bureau of Labor Statistics, 2015).

Given the scale of the issue, my colleagues and I were particularly drawn to exploring Cambodian gender dynamics. The aim of the study was to understand the current state of gender (in)equality in Cambodia, particularly analyzing differences across gender and generations.

We chose to conduct a survey and in-home interviews. A nationally representative survey was necessary as it was important for the findings to be projectable to the larger population. We included a qualitative component (in-home interviews) in order to unearth applications of the trends we learned from the survey research and to gain richer insight into Cambodian women’s lived experience at a personal level.

At a macro level, the survey research revealed:

The study made a broad array of recommendations, both relevant to Cambodia (e.g., encourage a ban on teaching women to adhere to Chbab Srey in the public school system, promote diverse role models, encourage civil participation and activism, etc.) and applications to other markets (e.g., speak out against traditional codes of conduct that persecute certain groups, encourage women to become financially independent from men, invite men into the conversation, advocate for Internet access and digital literacy, and encourage women to support each other, etc.).

While these findings isolate key gender gaps and provide suggestions for a way forward, they don’t evoke a particularly strong emotional response.

And that’s where the case study came in.

Toward the end of the study we included a case study, the story of Channa*. This allowed us to provide a real, compelling narrative about the personal journey of a rural, uneducated Cambodian woman’s rise to becoming a community thought leader and a financially independent entrepreneur through technology and non-institutionalized education. In particular, the case study demonstrated the power that digital literacy can have, especially for empowering rural, uneducated women.

The Story of Channa
How technology and informal education is changing the lives of rural, uneducated women 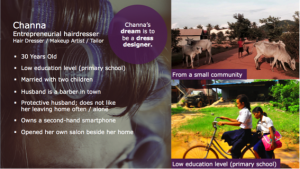 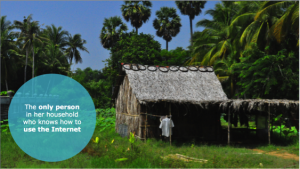 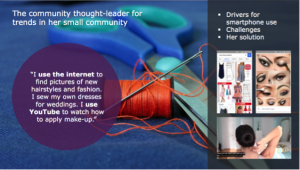 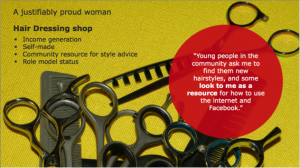 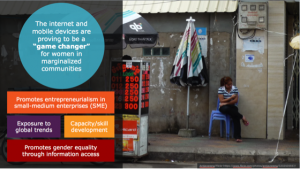 Dissemination of the study came in two forms:

In both cases, the case study – the story of Channa – was the component that spoke to listeners/readers.

In addition to positive feedback from ESOMAR Congress attendees, the case study enabled the study’s larger survey findings to be heard among the NGO audience. We’re proud of the following outcomes of this research effort:

While the survey was more time intensive, the case study brought the study’s findings to life and inspired others into action. My best advice to organizations embarking on a research effort is to incorporate a qualitative research component (e.g., in-depth interviews, observations, in-home visits, focus groups, etc.) into quantitative studies. Doing so translates findings into something human and relatable to your audience, which in turn motivates people to act.

Because, after all, what’s the point in conducting research if it doesn’t inspire action?

Kantar TNS Cambodia is the fastest-growing customized market and social research agency in Cambodia. Based in Phnom Penh, we lead the industry with our high standards of data collection and innovative tools that enable us to get to the heart of our client’s issues.